The Other Side of Everest 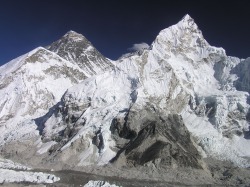 The first contact with the Sidereal occurred through a portal on the north slopes of Mount Everest. Once in the Sidereal, Dr. Harrigan found some similarities -- freezing temperatures and scant oxygen -- to the ecosystem he had left behind. Upon further exploration, however, Harrigan discovered a diversity of animal life virtually unthinkable on Everest.

A series of caves, the Labyrinth of Frozen Clouds, create a network of protected environs throughout the massive mountain range. The caves ascend even into the high peaks, where temperatures rarely rise above -20C. The extensiveness of the caves creates many distinct microcosms, which favor different adaptations. In the caves, Harrigan discovered over fifty species of insects and a vast array of microbial life hidden in tiny air pockets in the frozen strata. Core samples reveal that life exists as far as ten meters into the rock.

Plant life, too, is varied beyond what might be expected for such a frozen land. At the mouths of caves grow lichens, groundflowers, and many species of spiny plants that seem nothing more than dead twigs, but which contain active vascular systems full of nutrients. These plants, along with the myriad microbial organisms inside the caves, support at least five mammalian species, three of which are displayed here.

All three of the species possess an adaptation that allows them to flare the tips of their extremities. Powerful cilia surround the opening of tube-like limbs, ears, and tails. The cilia themselves contain microscopic suction cups that allow the animal to grab onto almost any object or surface. When the animal contracts the cilia, its paws, tail, or ears appear just as they might on an animal without the adaptation. The modified appendages allow for unusual feeding mechanisms and methods of communication between individuals.

Due to the extreme conditions of the Labyrinthine Mountain Range, a great deal of equipment was lost, including the expedition team’s cameras. Therefore, these specimens are the only evidence of this Sidereal ecosystem that we have. Harrigan was unable to access this part of the Sidereal a second time.