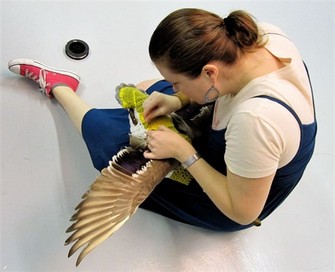 photo by Rob Brinkley
Elaine Bradford is interested in nostalgia created through processes and objects. Her grandmother taught her how to crochet and she has worked with the craft throughout her life. She began to use this and other traditional “women’s work” in her art for its connotations of personal history, hours or labor and concepts of comfort. She is also a collector, mining thrift and antique stores to find  discarded pieces of people’s lives. She then transforms these objects with crochet, embroidery and collage, and brings them a new life and gives the audience a small glimpse into an alternate world. The work embraces oddity, often full of abnormalities and absurdities. Bradford is interested in public art’s ability to interact with viewers in ways that can’t be experienced in a gallery setting. When you come across an installation in an unexpected location, it can change viewers perceptions of the possibilities of art, and hopefully bring a smile to their face.

Bradford lives and works in Houston, TX.  She holds an MFA from the California Institute of the Arts (2003) and a BFA from the University of Texas at Austin (2000). Her work has been included in numerous shows both nationally and internationally, including Lawndale Art Center in Houston, TX; Hyde Park Art Center in Chicago, IL; Jenkins Johnson Gallery, New York, NY; Handmade in America Gallery in Asheville, NC; and Centre Culturel Aragon in Oyonnax, France. Select solo shows have been at ArtLeague Houston, Houston, TX; Hunt Gallery, Webster University, St. Louis, MO; and Women & Their Work, Austin, TX.
​
Bradford was one of the founding members BOX 13 ArtSpace, an innovative artist run studio and gallery space in Houston’s East End. She was a resident artist at the Houston Center for Contemporary Craft in 2010. In 2011 she completed a permanent civic art commission for the City of Houston at Vinson Neighborhood Library. Throughout 2017, she worked with Houston poet Sara Cress on a project where they created a “sculpture poem” every week of the year, which can be viewed at routinefables.com. Bradford is an Artist Fellow at the Sandhills Institute in Rushville, NE and will be working through the coming years to develop a project with the local community. In January of 2019 she completed a permanent installation in an HEB grocery store in Houston, TX.