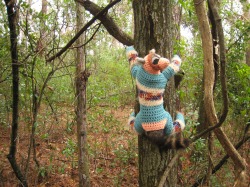 Affectionately dubbed pair-bears (Procyon besheret) by Dr. Harrigan, these forest-dwelling mammals display an unusual mating ritual. Individuals spend years wandering the forest in search of a mate with matching coat color and pattern. Once this mate is discovered, the bears together dig a burrow large enough to accomodate both of them. They then nest inside, pulling the soil in to cover their bodies. What takes place inside the burrow is unknown, but the two emerge ten days later with their tails fused.

Social creatures, the pair-bears gather at feeding grounds to forage for seeds and insects, vocalizing to one another as they search. They possess an advanced sense of touch due to microscopic tubules on the pads of their paws. They are a tactile species, seeming to enjoy burrowing for days in hollow trees and logs, wound around one another. Their joined tails serve as an aid in arboreal foraging, allowing the pair to hang from branches while pilfering bird eggs from nests or swinging to reach ripe fruit. 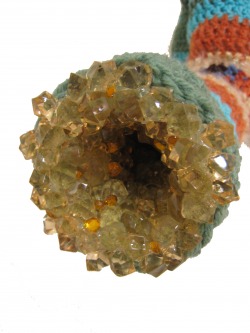 During his observations, Harrigan discovered that despite originally existing as two individuals, once fused, the pair-bears cannot survive without one another. If one sickens or dies, the other does also. Upon observing this phenomenon, Harrigan collected the pair and performed a necropsy. Within the fused tails, he discovered a complex and incredibly strong crystalline structure. How this is formed is as yet unknown, but when the incision was made during necropsy, the crystals within continued to grow outward the way a coleoptile of grass shoots upward after being cut.