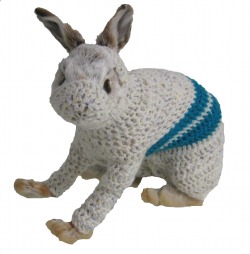 Lepus microphagus, the cloud hare, is found throughout the tunnel network, both near the entrances to the caves and also deep within them where there is no light. The rabbit-like creatures are able to exert incredible suctional force with the ends of their extended limbs. Using these modified paws, they attach to rocks, literally vacuuming up microbes that live in tiny air pockets within the strata. The suction cups on their paws are hyper-sensitive, capable of detecting the presence of microscopic life as the hares feel their way through the darkest caves. A unique vascular system channels the microbes from the hare's paws to its stomach where they are digested.

The gregarious hares share communal dens throughout the cave network. During exploration, they communicate with family members through their elongated ears, which are capable of fusing together and disconnecting via an aggregate of super-cilia at the very tips of the ears. Even while individuals explore separate caves, their interwoven cilia vibrate, sending information to their partners. 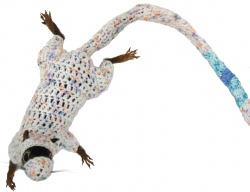 The ninja squirrel, Sciurus ninja is equipped with specialized suction it its tail, which it uses to anchor itself to the rock features of the caves. It then springs from wall to wall, pouncing on spiders and other insects hiding in the crevices of the cave walls, or on the jagged surface of the cave floor. The ninja squirrels are solitary foragers, only briefly joining with others of their kind to mate. The female will then raise her pups alone after gorging herself on enough insects to sustain her for several weeks.

Throughout the day, the ninja squirrel displays several frenetic periods of feeding, but spends over 75% of its time resting in crevice nests. When captured, its heart rate was too fast to be recorded, but was estimated to be approximately 1,000 beats per minute. Incredibly light, the squirrels regularly consume more than their body weight in food each day. 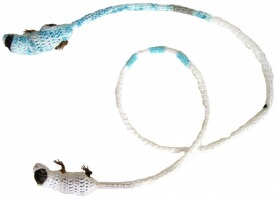 The trapeze squirrel, Spermophilus pendula, lives at the mouths of the caves and feeds upon the low-growing plants both outside and in the near reaches of the caverns. Whether feeding in or out of the caves, these squirrels prefer hanging by their tails to walking on twos or fours. One of the marvels of the Sidereal ecosystem is the relationship between the trapeze squirrel and the delicate blue snowflowers that grow at the entrances to the caves. Most arctic and tundra species are wind pollinated, if they reproduce via pollen at all, but snowflowers are pollinated by trapeze squirrels. As the squirrels swing, grabbing at leaves and seeds, they brush the snowflowers, picking up pollen from one plant and depositing it on another.

Like the cloud hares, the trapeze squirrels connect with one another, but by using the cilia in their tails. They are thus able to communicate with one another as they swing back and forth from the stalactites on the ceilings of the caves. Pairs may be seen playing by dancing in midair, twirling like acrobats.